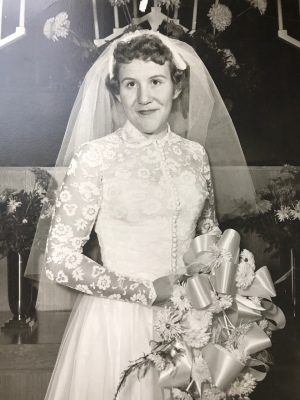 Ellen Ewing passed away on Wednesday, May 4th, 2022, in Baker City, Oregon. Ellen Faye Sellers was born August 6, 1935, near Forest Grove, Oregon, to Thelma Mae (Marr) and Charles P. Sellers. She grew up at Hillside and on Thatcher Road near Forest Grove.

On October 19, 1952, Ellen married her childhood sweetheart, Duane Anthony Ewing. They lived in the Banks area, where they raised their six children. Ellen was very active in the Banks community and in the PTA. She was instrumental in leading many fundraising events for the schools. Duane and Ellen were longtime members of the Banks Methodist Church and hosted several sunrise services at their home on Eberly Road. Ellen also served as the Banks Grade School and Banks Middle School Librarian. She was proud of assisting Duane in his real estate business.

As their children grew and moved away, Duane and Ellen relocated to the Baker City area. They lived in several parts of Baker County, finally settling on Deer Creek Road near Sumpter. This is the home remembered by many of the grandchildren as a place for sledding parties and Teddy Bear Picnics.

Their final move together was to the Witness Tree Ranch near LaPine, where Duane was the caretaker for several years. After Duane’s passing in 2007, the owners of the ranch invited Ellen to stay on for several more years.

Ellen lived with or near each of her children after leaving the ranch, making her home in Maupin, Banks, Forest Grove, Bend, and Baker City.

Ellen is survived by her sister, her six children, and their spouses: Chuck and Debby Ewing of Sunriver, Lynn and Theresa Ewing of Maupin, Ed and Barb Ewing of Banks, Tom and Lynne Ewing of Baker City, Laurie and Dave Bond of Independence, and Alan and Tami Ewing of Baker City; 20 grandchildren and their 18 spouses; and 43 great-grandchildren. She will always be Grandma Honey to those grandkids and greats. She is also survived by her sister, JoAnn Arnold, and a great many nieces and nephews. She was preceded in death by her husband Duane, her sisters Mary Jane Lyche and Charleen Montieth, and her great-granddaughter Ellie Ewing.

A Graveside Service will be held on July 8, 2022, at 1:00 PM at the LaPine Community Cemetery. All are welcome. A chance to meet and share memories about Ellen will be hosted by the family at the LaPine Senior Center following the graveside service.

Cards and Flowers may be sent in the care of: T.J. Ewing, 15823 Sunrise Blvd, LaPine, OR 97739.  In lieu of flowers, donations may be made in Ellen’s name to the “Friends of the Banks Library” and marked as “Memorial Donation in Honor of Ellen Ewing.” Funds raised will go toward the Children’s Area Remodel Project.

To send flowers to the family or plant a tree in memory of Ellen, please visit our floral store.